Following a downturn that saw three straight League losses in January, the Reds got back to winning ways with Tuesday night’s 3-1 victory over Carrick Rangers and McMenamin – hat-trick hero of that success – has underlined the importance of collecting another three points against Dungannon Swifts tomorrow.

“Dungannon are fighting for their lives but everybody that comes here, we want to pick up three points against them.

“We’ve let ourselves down over the last couple of weeks and it’s time we started to get a couple of wins on the bounce and start climbing the table again.” 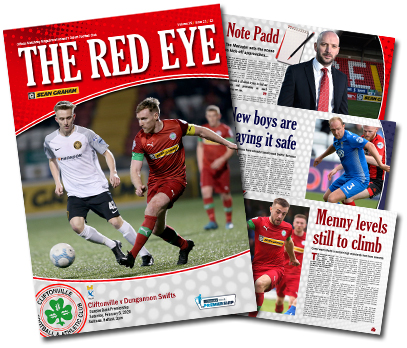 You can read the full McMenamin interview in tomorrow’s edition of our Matchday Magazine, which will be on sale at Solitude for £3.

Featuring pre-match views from the Manager’s Office, The Red Eye’s 21st issue of the campaign carries your latest player poster, looks at the Swifts’ recent upturn and steps 130, 88 and 23 years back down memory lane – plus plenty more besides.