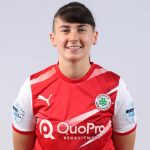 First on Cliftonville’s books in 2015, Toni-Leigh has also spent a brief spell at Willowbank in a career that has seen her capped by Northern Ireland at Under-15, Under-16, Under-17 and Under-19 level.

A player who can operate in both midfield and defence, Toni-Leigh was part of the Northern Ireland senior side that qualified for Euro 2022 but an injury in the months leading up to the tournament saw her miss on the squad.