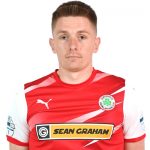 Despite being a part of the Ballinamallard United side that was relegated from the Premiership in May 2018, there were no shortage of suitors for Curran’s signature that summer.

The hard-working forward won both the Player of the Year and Players’ Player of the Year accolades in his first season with Cliftonville and scored the dramatic injury-time winner against Ballymena United in the County Antrim Shield Final in January 2020.

Last year, the former Derry City man’s 24 goals earned him a share of the Club’s Golden Boot with Joe Gormley, as well as helping the Reds secure automatic European qualification.