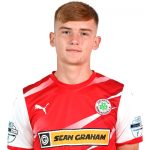 Handed his debut by Caretaker Manager Michael Press in January 2019, Casey can operate in central defence and midfield, and enjoyed Championship title success during a loan spell with Newry City in the second half of the 2021/22 season.

The former Northern Ireland Schoolboy international, who impressed in County Antrim Shield victories over Knockbreda and Dundela during the opening week of the 2020/21 campaign, is a graduate of the Cliftonville Academy and penned his first professional contract with the Club in August 2020.