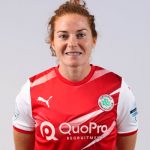 One of the most recognisable figures in Irish women’s football, Marissa has been a driving force both on and off the field for Cliftonville in an association stretching back almost two decades.

Captain of the Northern Ireland Women’s side that qualified for Euro 2022, Marissa has been a stalwart of the game at Solitude, overseeing the establishment and continued growth of a Ladies team as well as the development of young players on the Girls Academy.