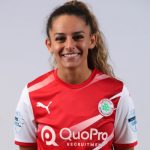 A fleet-footed midfielder with an eye for a pass, Louise first established her Danske Bank Women’s Premiership credentials during a number of hugely successful seasons with Linfield Ladies and, following spells with Blackburn Rovers and Heart of Midlothian, moved to the Reds in the summer of 2021.

The scorer of Northern Ireland Women’s first ever goal at Windsor Park when she found the net in a 4-0 defeat of Latvia shortly after joining Cliftonville, Louise was part of the squad that competed at Euro 2022.