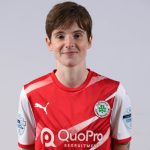 One of the most prolific scorers in recent Irish League history, Kirsty joined Cliftonville ahead of the 2021 season and continued the goal-grabbing feats that had made her such a hit during a trophy-laden spell with Linfield Ladies.

Just like younger sister Caitlin, keen GAA star Kirsty was also once on the books of St Oliver Plunkett and had a brief spell with Glentoran before returning to the Blues.

A year at Sion Swifts pre-dated her arrival at Solitude, since when she has further enhanced her credentials as a key member of the Northern Ireland set-up impressing during the team’s qualification for Euro 2022.