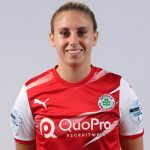 After beginning her career with Comber Rec, Kelsie enjoyed two spells with Linfield either side of a stint on the books at Blackburn Rovers and joined Cliftonville in July 2021.

Capped at by Northern Ireland at Under-17, Under-18 and Under-19 level, Kelsie was part of the senior side that featured at Euro 2022.