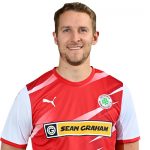 An experienced central defender of some repute, Jonny moved to Cliftonville from Ballymena United during the summer of 2021.

Formerly with Carrick Rangers and Glentoran, Addis quickly established himself as a fans’ favourite at Solitude and even has a Supporters Club named in his honour.