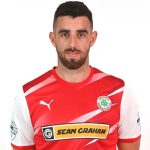 A double title-winner with the Reds prior to a move to Peterborough United, the man known simply as ‘The Goal’ remains a regular presence at the top of seasonal goalcharts and is widely recognised as arguably the most deadly finisher in Ireland.

He maintained that reputation with a stunning end to the 2021/22 campaign when he earned a share of the Club’s Golden Boot with Ryan Curran en route to shooting Cliftonville to a League Cup Final victory over Coleraine and second place in the Danske Bank Premiership.