Scorer of one of the most iconic goals in the history of Irish football, Tony Bell netted 25 times in 64 appearances over three seasons at Solitude and was inducted to the John McCredy McAlery Hall of Fame in May 2019.

Formerly with Portadown, Tony – whom the 1979 Irish Cup Final matchday programme said ‘could figure’ in that Windsor Park decider with his hometown Club – picked up possession on the edge of the box and, with the tie edging towards a replay, led commentator George Hamilton to utter the immortal line: “And here’s Tony Bell, I wonder can he fix it? Yes!” 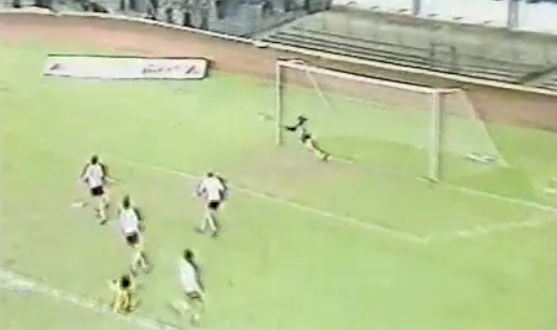 In that celebrated 1978/79 campaign – when, of course, the Reds also lifted the County Antrim Shield – Bell made something of a habit of scoring in cup competitions, with just three of his 14 goals coming in League fixtures.

Part of the first Cliftonville line-up to play in Europe when French giants FC Nantes Atlantique visited for a Cup Winners’ Cup clash a few months after that defeat of the Ports, Bell may only have been at Cliftonville for a relatively short spell – indeed, he made the fewest appaerances out of all the 79ers – but his contribution remains revered to this day, reflected in his status as a respected Hall of Famer.