Inducted to the John McCredy McAlery Hall of Fame in May 2019, Peter McCusker scored 45 goals in 253 appearances over nine seasons at Solitude.

A star of the Down and Connor League, contemporary reports from the late 1970s assert that Peter was “a quick-thinking players, whose style won him many admirers” and that was certainly true of the Red Army, who have revered his name for more than four decades. 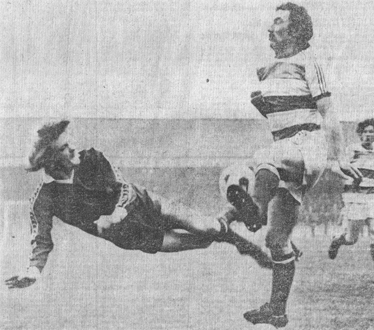 Runner-up for the NI Football Writers’ Player of the Year Award for the 1978/79 season, McCusker played in 44 of Cliftonville’s 48 fixtures across all competitions during that iconic campaign and found the net 12 times in a term that ended with a memorable Irish Cup Final victory over Portadown.

Part of the first Cliftonville side to play in Europe when French giants FC Nantes Atlantique visited for a Cup Winners’ Cup clash a few months after that famous Windsor Park defeat of the Ports, only two of the famous 79ers – Eamonn Largey and Walter Mills – served the Club longer than McCusker, who has remained no stranger to Solitude since the conclusion of his playing days, having assumed a multitude of off-the-pitch roles over the years and it goes without saying that his place in the folklore of Ireland’s Oldest Football Club has long since been cemented.