Inducted to the John McCredy McAlery Hall of Fame in May 2019, John Platt scored 99 goals in 190 appearances over six seasons at Solitude. 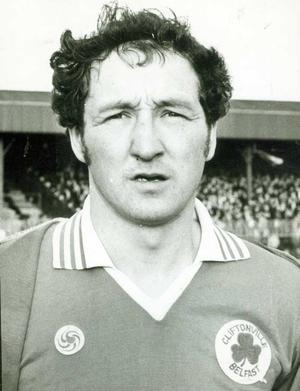 Signed from Carrick Rangers, Platt’s striking prowess remains the stuff of legend among the Red Army and he featured in 42 of the Club’s 47 fixtures across all competitions in the iconic 1978/79 campaign, during which he found the net 29 times – including a memorable strike in the Irish Cup Final victory over Portadown.

Part of the first Cliftonville side to play in Europe when French giants FC Nantes Atlantique visited for a Cup Winners’ Cup clash a few months after that famous Windsor Park defeat of the Ports, Platt was forced to retire from the game just a couple of years later after sustaining an eye injury in an accidental clash with his good friend and fellow Hall of Famer, Peter McCusker.

To honour his significant contribution in a Red shirt, the Club staged a memorable Testimonial Match against Middlesbrough in May 1982 on a night when Martin O’Neill and Gerry Armstrong – both of whom would represent Northern Ireland at the World Cup a month later – turned out in Cliftonville colours. 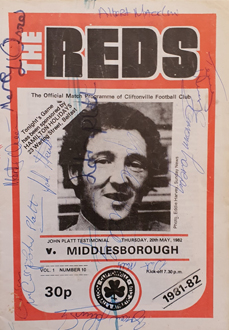 Trailing 2-1 to their English visitors as the contest entered its final minutes, the Reds would snatch a dramatic draw when Armstrong delighted the Solitude crowd by setting off off on a lung-busting run in front of the Main Stand before delivering the cross that saw Platt nod home the equaliser at the Cage End – his unofficial 100th and final goal for the Club.

Fast forward 20 years and Platt was back on the hallowed turf once again for a Charity Match between the Reds and a Legends/Supporters XI in the summer of 2002, when he demonstrated that he certainly hadn’t lost his eye for goal; registering two eye-catching strikes and twice going close to a hat-trick when he first struck the crossbar with a free-kick before seeing a later effort creep along the goal-line.

His Testimonial Matchday Programme declared that “the man whose goals brought Cliftonville back from the dead as a Club deserves as much support as possible” – and he certainly got it from a grateful Red Army, who continue to worship him to this very day.