Inducted to the John McCredy McAlery Hall of Fame in May 2019, John Flanagan scored two goals in 103 appearances over four seasons at Solitude.

Formerly with Ards and Crusaders – with whom he won the Irish League title – Flanagan was described as one of the Reds’ “best ever signings” by contemporary observers and certainly endeared himself to the Club’s supporters with a series of exemplary performances at the back. 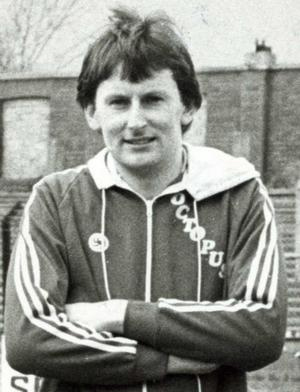 In the celebrated 1978/79 campaign – when, of course, Cliftonville lifted the Irish Cup and County Antrim Shield – only goalkeeper Brian Johnston made more appearances than Flanagan, who (along with Brendan McGuckin) turned out in 46 of the team’s 47 fixtures across all competitions, with his goal in a 4-2 defeat to Glentoran on February 27 representing half of his overall tally in a Red shirt!

Part of the first Cliftonville line-up to play in Europe when French giants FC Nantes Atlantique visited for a Cup Winners’ Cup clash a few months after that famous Irish Cup victory over Portadown, John may only have been at the Club for a relatively short spell – indeed, only three of the famous 79ers made fewer overall appearances – but his contribution was colossal, reflected in his status as a respected Hall of Famer.