Jamie McDonagh wants Cliftonville’s players and supporters to inspire one another during tonight’s BetMcLean Cup semi-final.

The Reds host Coleraine in what promises to be an electrifying occasion at Solitude and McDonagh believes victory would be the perfect way to right the wrongs of the weekend’s defeat to Ballymena United.

“We have to bounce back, we talked about it in the changing room – we’ll keep that between ourselves – and we have to fix it,” he declares.

“It will be good to play a semi-final under the lights at Solitude. The atmosphere is unbelievable at Solitude and hopefully we can give the fans a better performance than we did on Saturday.” 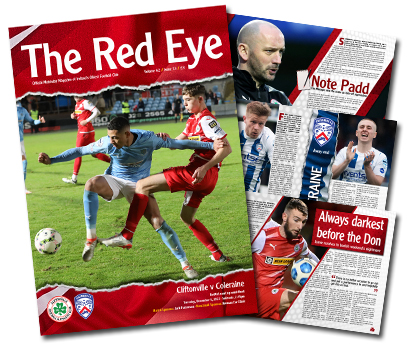 You can read the full McDonagh interview in tonight’s’s edition of our Matchday Magazine, which will be on sale at Solitude for £3.

Carrying pre-match views from the Manager’s Office, The Red Eye’s 13th issue of the campaign reflects on the Bannsiders’ growing momentum and steps 138, 42 and 25 years down memory lane – plus plenty more besides.