Newry City’s performances in this season’s previous visits to Solitude will sharpen Cliftonville’s focus for tomorrow’s latest encounter, according to Nathan Gartside.

The goalkeeper is seeking a fourth consecutive clean sheet in this weekend’s Danske Bank Premiership battle but knows the Reds will have to be on their game against an opponent he has been impressed with.

“Just because it was a 4-0 win in the first League game meant absolutely nothing as the Cup game showed with them going 2-0 up,” he explains.

“They are every bit as dangerous as any other team in the League. It’s important we keep the head down, keep the focus entirely on them, don’t look past them and do our jobs – which is getting another three points and hopefully another clean sheet.”

Though he has kept Linfield, Dungannon Swifts and Glentoran at bay over the last couple of weeks, Gartside dismisses any individual acclaim and adds: “I’m here to do my job which is to keep clean sheets and help the team win. We defend from the front, so every single player that plays has a role in keeping clean sheets and keeping tight.” 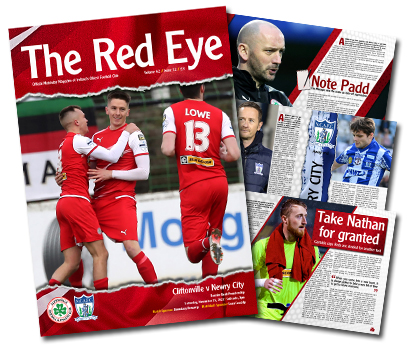 You can read the full Gartside interview in tomorrow’s edition of our Matchday Magazine, which will be on sale at Solitude for £3.

Carrying pre-match views from the Manager’s Office, The Red Eye’s 12th issue of the campaign reflects on City’s entertainers and steps 28, 20 and 10 years down memory lane – plus plenty more besides.