Ronan Doherty believes that all of the expectation being on DAC can help Cliftonville deliver a performance in tonight’s Europa Conference League clash at Solitude.

The Reds enter the second leg of the first qualifying round tie facing a 2-1 deficit from last week’s encounter in Slovakia and, while he acknowledges the visitors are firm favourites to make progress, ‘Olly’ insists nobody on the Cliftonville side will give anything up without a fight.

“Playing in Europe is something we put a serious amount of effort into achieving last season but it’s not just about qualifying, it’s about doing well when you’re there.

“You also have to try and make the most of everything associated with it.” 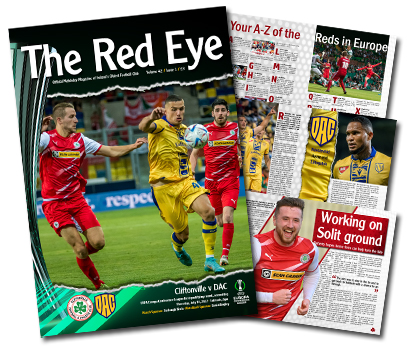 You can read the full Doherty interview in tonight’s edition of our Matchday Magazine, which will be on sale at Solitude for £3.

Featuring pre-match views from the Manager’s Office, The Red Eye’s first issue of the campaign reflects on the continental history of both teams and carries an experiment on the very fabric of European Club football – plus plenty more besides.