Cliftonville visited MOL Arena for a training session this evening as the countdown to tomorrow’s Europa Conference League clash with DAC continues.

The Reds are based in Bratislava for the first leg of this first qualifying round tie but made the short journey to Dunajska Streda, where they were put through their paces in addition to familiarising themselves with the venue that will host their opening encounter with the Fortuna Liga side. 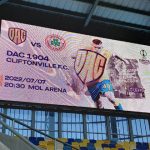 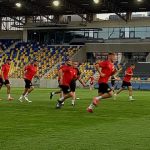 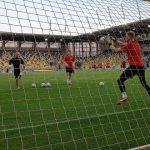 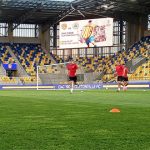 With a capacity of 12,700, MOL Arena – which was originally opened as Metsky Stadion in 1953 but underwent a £19m transformation in 2019 – is named after the Hungarian multinational oil and gas company MOL Group and will tomorrow night welcome more than 200 Cliftonville fans among an approximate overall attendance of 5000.