Just over a fortnight remains until European football returns to Solitude – and we’re calling for your assistance in the countdown to Cliftonville’s Europa Conference League tie with DAC.

Passionate about bringing the Red Army out in their numbers, we’re doing our utmost to ensure that everybody’s fully informed about the first qualifying round second leg clash on Thursday, July 14, for which tickets are available online.

To help spread the word, we want Cliftonville supporters to print out our matchday poster so that as many people as possible are alerted to the forthcoming continental action on their doorstep: 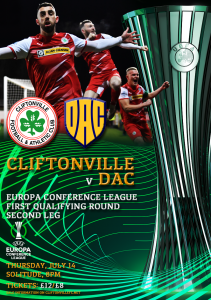 If you know of a local noticeboard, shop window or community hall with advertising space available, we would be delighted to see it occupied by our Europa Conference League promotional material – after permission has been sought from the relevant persons, of course! 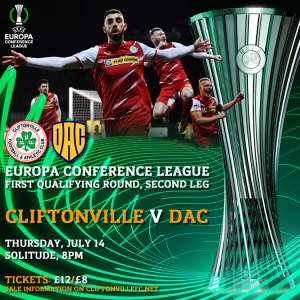 Perhaps you’d rather provide a more prominent reminder of the upcoming second leg clash by changing your social media avatar? If so, feel free to make use of the imagery below to let your friends, family and followers know that there will be European football at Solitude on July 14 – and encourage them to share our promotional graphics as together we bid to make sure that Paddy McLaughlin and his players are roared on by a typically vociferous fanbase. 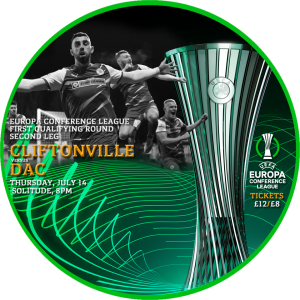