They say it’s the taking part that counts – and even being involved in today’s tournament at The Hawthorns is an achievement in itself for Cliftonville’s Under-7s.

A last-minute flight cancellation at Belfast International Airport yesterday looked to have put paid to the Wee Reds’ dreams of lining out at the home of West Bromwich Albion this morning but, thanks to the resolve and initative of the coaches and parents within the group, the team made it to their destination. 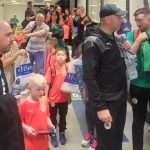 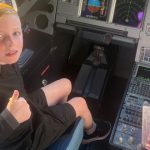 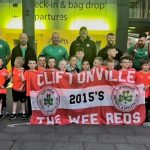 With the help of airport staff, the travelling party were rebooked on to three separate flights to Gatwick before taking the train from London to Birmingham, where they arrived much later than originally scheduled but in plenty of time to have a good night’s sleep before taking to the pitch this morning.

As well as wishing our Under-7 side the best of luck for the tournament, Cliftonville FC place on record how proud we are of the enthusiasm and application of our dedicated coaching team and the players’ parents who, rather than take the easy option of simply accepting that fate had conspired against them, went above and beyond to ensure that our stars of the future didn’t have their dreams dashed.