He’s the man who sets the scene for the team on matchday and Brian Campbell will this weekend reach the milestone of 800 games as Cliftonville’s Kitman.

Saturday’s Danske Bank Premiership fixture with Glentoran will also bring the curtain down on Brian’s 15th season in a role he has savoured since formally extending his family’s distinguished links with the Club back in 2007.

Indeed, the Reds’ 130th Anniversary clash with Celtic two years later coincided with his meeting of Cliodhna, whom he married in 2017 and with whom he has two children, Eimear and Oscar.

His services have also been extended to the international stage with Northern Ireland’s Under-21 side and, ahead of this week’s milestone match at The Oval, cliftonvillefc.net caught up with Brian – whose job also includes behind-the-scenes work for our social media team and coordinating matchday graphics to ensure our online teamsheets tally up with the jerseys being worn by the team – to hear all about the highs, lows and in-betweens of a decade-and-a-half in our dressing room.

How did you first come to support Cliftonville?
The first game I went to was with my uncle, our Club Doctor John Campbell. After that I would have gone with him or my dad most Saturdays to the games. Since then, I suppose you can say I was hooked on the Reds.

How did you first become Kitman?
Going to matches with the Doc, I would have been hanging about before games and waiting on him for a lift home after. My dad and Gerard Lawlor had also worked together for years, and I think it was just a mixture of everyone saying that I should get involved in some way or another. So, after a pre-season friendly at the start of the 2007/08 season, Gerard asked me to take over as Kitman.

The first game I did was before we had the new dugouts in so I stood in the rain for the duration of the game looking up at my old seat in the Main Stand thinking I could be up there, dry and with a cup of tea! Thankfully I stuck at it.

What does your matchday routine generally consist of?
I would usually be at the ground three to four hours before kick-off (the players are getting earlier and earlier these days). Most Managers will give the me the matchday squad and team the day before the game so this makes it a lot easier, especially as every player has specific kit needs.

Match shirts get hung up first, most of the lads have their own seat in the dressing room. Match warm-up, under armours, shorts and socks all get laid out in the same way. Every item will always have the Club badge facing up and sized accordingly. I have a very specific routine and way of laying kit out, borderline OCD some might say.

After the changing room is ready, I make sure the match balls are pumped up, that there’s plenty of water for the lads and take a sample of the kit to the referees and sort out teamsheets.

After the game, the tidy-up begins, changing room gets cleaned and I take the dirty kits to the laundry to get washed before the next game. I’ll be the first to arrive and last to leave!

What other roles does your job entail?
Putting the kits out on the match day is the easy bit! Remembering to bring everything you need and packing for games away from home is always a crucial part, thankfully I’ve never been caught short!

There’s plenty to do between games, be it going to the laundry, printers, ordering kits and training wear, picking new kits, sorting pre-match and post-match food, booking buses… the list goes on. I’m always keen to help and do as much as I can to ensure the players are prepared for games and everything runs smoothly.

Have you ever offered a Manager advice during a game?
I wouldn’t go as far as saying tactical advice but most Managers do take into account thoughts and opinions of all staff on the bench and in the changing room. We are all here for the same reason!

What has been your standout fixture from the dugout?
This is quite tough one because, over the time I have been involved with the Club, we have been very successful. Celtic away, Copenhagen away and the Cup Finals have all been special, but I would have to say the 3-2 game against Linfield is still the standout game – the result, the way we won the game, clinching the League was unforgettable.

The League Cup win this season was something else too, coming from behind showed the character of this team!

Who are the most and least demanding players in the current squad?
To be honest, all the lads are great and the preparation for them is that good they don’t really need much more and don’t look for much. Jamie McDonagh is the most demanding! 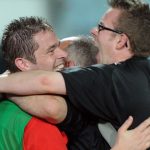 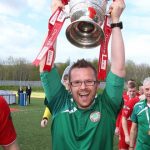 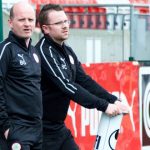 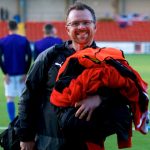 Who’s the best player you have watched during your time?
There have some quality players during my time, wee Geordie was outstanding and a great leader, the Scannells are up there as is Joe with the goals he has scored. All round though, Liam Boyce was something else. The ability and technique he had, you could see he would make it across the water. He was different class.

Who’s your favourite Manager to work with?
All the Managers I have worked with have been brilliant and brought something different to the Club in making us successful. I have got on really well with all of them, from the start with Eddie Patterson to Paddy now. A special mention to Tommy Breslin – even when he left the Club, we remained great friends and he was someone I still spoke with nearly every day.

What other opportunities has being Cliftonville’s Kitman opened up?
I was lucky enough to be offered the role of Northern Ireland Under-21 Kitman in November 2011. I have really enjoyed being part of this set-up and working with different coaches and players over the years. It’s always great to see players on the way up in their careers and helping them to progress. You also get to visit countries that you would never think of going to, not that you get to see much of them!

What’s the best thing about being a Kitman?
Apart from getting to pick up dirty, sweaty kit off the floor after games, just being part of the team, part of a Club you love and have supported for years is brilliant. It’s probably the most important role at a Club, after the Manager of course.

When I first started, I didn’t think I would last this long, but still here 15 years later. It’s an environment that once you are in, you don’t want to leave.

And the most frustrating?
Turning up at an away ground, usually ridiculously early, and it being locked. Does my head in! Small changing rooms also annoy me, with bigger squads and more staff, it’s a tight squeeze at times!

What’s the best stadium you’ve worked at?
Solitude, obviously. There are a few others that stand out – Parkhead, the Nagyerdei Stadion in Debrecen and the Parken Stadium in Copenhagen. The facilities were something else and the way we were looked after at Celtic was outstanding, they couldn’t do enough for us.

More recently, I enjoyed a trip to Seville with the U21s, the Estadio La Cartuja was up there with one of the best I’ve seen. A good modern changing room is always a plus point for me.

Who’s the most famous person you’ve met in your role as Kitman?
There have been quite a few. Working with the international team, I have met some famous players and coaches. I’m a big Man United fan too, so meeting Brian McClair when we played against Scotland is up there, he was actually doing kitman for that trip!

The most random and probably most famous was Ed Sheeran. I got a call from one of his management team who was looking to buy some Cliftonville merchandise, so I delivered it to him at the concert and he brought me in to meet Ed!