The Reds’ final home League game of the season sees Larne visit for another eagerly-anticipated encounter and, while Donnelly has been forced to watch the action unfold from the bench recently, he reveals that all players have bought into a mantra that has served the team well all campaign long.

“We’ve been confident in our own squad and own ability and, game by game, we’re just ticking one off,” explains the 22-year-old.

“Every game now is a tough game, all of the top six have done well this year and they’re all tough opponents no matter who you’re playing against.

“Larne is another big game and hopefully we can come out on top for what will hopefully be the last home game of the season.” 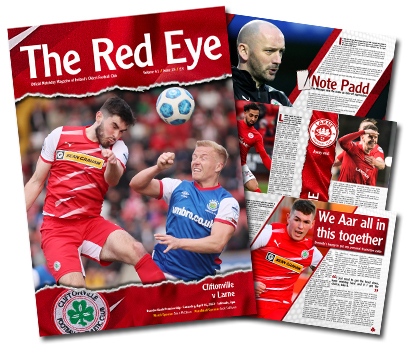 You can read the full Donnelly interview in tomorrow’s edition of our Matchday Magazine, which will be on sale at Solitude for £3.

Featuring pre-match views from the Manager’s Office, The Red Eye’s 25th issue of the campaign assesses Larne’s Play-Off ambitions and steps 11, 39 and 134 years back down memory lane – plus plenty more besides.