Kris Lowe has warned Cliftonville against reflecting on a job well done as the season approaches its most crucial stage.

The Reds have won plenty of plaudits for their performances in all competitions this term but, ahead of this evening’s Samuel Gelston’s Whiskey Irish Cup quarter-final with Coleraine, Lowe insists that he and his team-mates must continue to set the highest possible standards.

“Since the first day of pre-season, it was always in the back of our minds that we could go on and do special things,” says the 26-year-old, who this week penned a contract extension with the Club.

“We look at each other around the changing room and we’ve so much quality. So far we’re living up to our expectations but hopefully it’s not over yet. There is still a lot of football to be played and hopefully we can continue to get the results.” 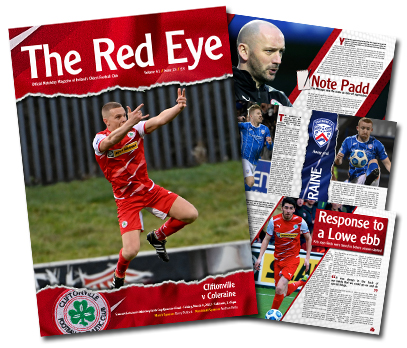 You can read the full Lowe interview in tonight’s edition of our Matchday Magazine, which will be on sale at Solitude for £3.

Featuring pre-match views from the Manager’s Office, The Red Eye’s 23rd issue of the campaign assesses the Bannsiders’ buoyancy and steps 111, 78 and 33 years back down memory lane – plus plenty more besides.