Jamie McDonagh acknowledges that Cliftonville face a mammoth test when they welcome Linfield to Solitude this evening.

The contest represents the Reds’ fourth consecutive Danske Bank Premiership fixture against full-time opposition and McDonagh believes experiences of recent weeks can stand the hosts in good stead for the challenge.

“You’ve got Glentoran, Linfield, Crusaders, Larne – they’re all tough teams to play against and it’s always a massive game coming up against Linfield,” says the 25-year-old.

“They’ve won League titles for years and they’ve got that experience in their team. It’s not going to be easy. It’s going to be a tough, tough game for us, but we’ll be well prepared for it.” 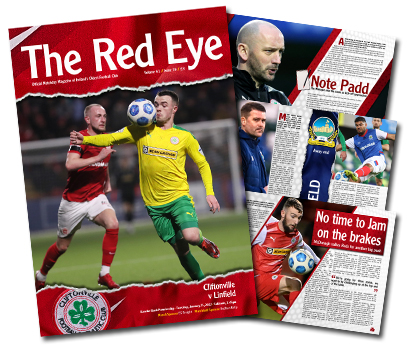 You can read the full McDonagh interview in tonight’s edition of our Matchday Magazine, which will be on sale at Solitude for £3.

Featuring pre-match views from the Manager’s Office, The Red Eye’s 19th issue of the campaign assesses the Blues’ prospects and steps 86, 27 and 11 years back down memory lane – plus plenty more besides.