Paddy McLaughlin says that Cliftonville are raring to bounce back from their midweek loss to Crusaders – but has warned against merely using tomorrow’s Samuel Gelston’s Whiskey Irish Cup first round tie with Islandmagee as an opportunity to get back to winning ways.

The Reds boss acknowledges that his men are favourites to come through the Solitude encounter but insists the Amateur League visitors will not be taken lightly in Cliftonville’s pursuit of a rewarding Cup run.

“The end of every run presents an opportunity to start another one and I know that’s how the boys see things,” he says.

“Cup upsets are part and parcel of football and I know Cliftonville have found themselves on the receiving end of a few down the years, so we’ll be giving Islandmagee all the respect in the world.

“They’ve earned their place in the draw and they have just as much right to be here as us, so we’d be stupid to take their threat lightly.” 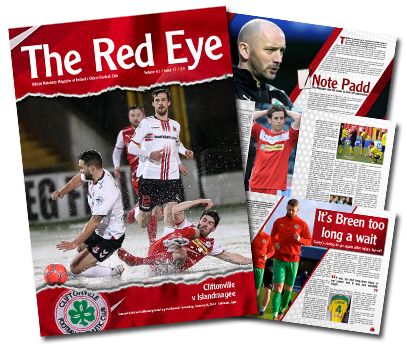 You can read McLaughlin’s pre-match assessment in its entirety in tomorrow’s edition of our Matchday Magazine, which will be on sale at Solitude for £3.

Alongside views from the Manager’s Office, The Red Eye’s 17th issue of the campaign takes a fate-tempting look back over 43 years of Cup heartache, catches up with Garry Breen, toasts a particularly unusual feat achieved by Islandmagee in previous rounds and steps 112, 28 and 17 years back down memory lane – plus plenty more besides.