Paddy McLaughlin says the delayed status of this season’s festive North Belfast Derby will not take away from the sense of occasion at Solitude.

Cliftonville host Crusaders in a Danske Bank Premiership tie postponed from December 27 and, unlike last year’s rearranged St Stephen’s Day battle, tonight’s showdown will be played out in front of a full house, with the Red Army having snapped up every available ticket.

McLaughlin has admitted to a sense of frustration that the game didn’t go ahead as planned last Monday but is grateful for the opportunity ahead of him and his team this evening.

“It doesn’t matter what date games fall on, big games are still big games,” he declares.

“The calendar doesn’t dictate the nature of games. The fixture was a sell-out almost a week before it was due to be played. The fans have been an absolutely crucial part of what we have been doing this season. Take Saturday, for example – we’d almost as many fans at Mourneview as Glenavon had, which is a very rare thing in the Irish League.

“We’ve 10 wins out of 10 in the League at Solitude, which is an unbelievable home record. It’s important that we maintain that good form.

“I think our fans know the role they are playing and how important they are to us. And I’m sure they’ll be there in their numbers again for another tough game in the North Belfast Derby.” 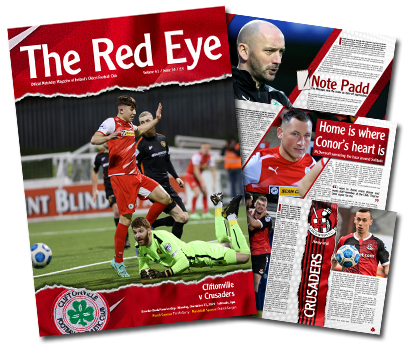 If you’re one of the ticket-holders attending tonight’s sold-out clash, be sure to pick up the latest edition of our Matchday Magazine, which will be on sale for the reduced price of £2.

Featuring views from the Manager’s Office, The Red Eye’s 16th issue of the campaign catches up with Conor McDermott and looks at the Crues’ prospects for the second half of the campaign – plus plenty more besides.

All tickets have been sold, with tickets for the original December 27 date remaining valid. Members Tickets, Season Tickets and Family Tickets are, however, NOT valid for this fixture.