Ryan Curran believes that one of the Danske Bank Premiership’s most attractive properties is the competitive nature of every team.

The Reds head into tonight’s Solitude showdown with Portadown fresh off the back of a dramatic late comeback against Glenavon on Saturday and, though naturally buoyed by that victory, two-goal hero Curran is ready to reset the emotions for another stern test.

“The games are coming thick and fast and there’s definitely no easy games in this League,” he says.

“No matter who you play, whether it be the team second in the League, top of the League or dead last, there is definitely no easy game.” 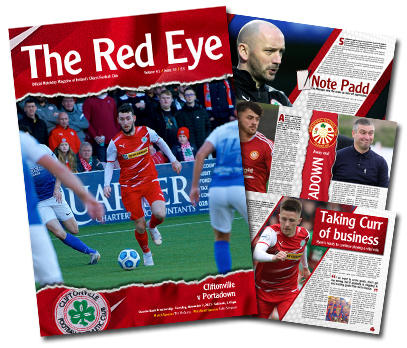 You can read the full Curran interview in this evening’s edition of our Matchday Magazine, which will be on sale at Solitude for £3.

Featuring pre-match views from the Manager’s Office, The Red Eye’s 10th issue of the campaign reflects on the fine margins that have gone against the Ports and steps 36, 89 and 132 years years back down memory lane – plus plenty more besides.