Rory Hale insists that nobody at Cliftonville is paying any heed to the Danske Bank Premiership table.

The Reds may lead the way ahead of tomorrow’s Solitude showdown with second-placed Larne but Hale is well aware that mid-October standings are largely irrelevant.

“We’re the only ones that aren’t looking at the League table,” maintains the 24-year-old.

“We can’t get ahead of ourselves, we know it’s early days and we’re on a good run of form, but it’s just another match for us, we’ll prepare like we prepare for every other game.

“We’ll not look at it as first against second or a top-of-the-table clash. We’re just looking at it as another game – there’s no point in putting that added pressure on yourself because sometimes it doesn’t work out.” 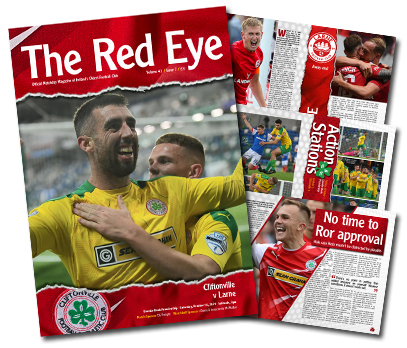 You can read the full Hale interview in tomorrow’s edition of our Matchday Magazine, which will be on sale at Solitude for £3.

Featuring pre-match views from the Manager’s Office, The Red Eye’s seventh issue of the campaign reviews Larne’s rewarding transfer strategy and steps 38, 45, 95 years years back down memory lane – plus plenty more besides.