The Reds commence their League Cup campaign with a second round tie against Gary Smyth’s Lough 41 Championship side and, while well aware of the threat the visitors will pose, Dunne says that everyone in the home dressing room is focused on delivering trophies in the months ahead.

“As a group, we want silverware this year,” asserts the 21-year-old ahead of a tie that could see Colin Coates make his Cliftonville debut.

“We know there is a lot of full-time teams but I don’t see any reason why we can’t challenge them with the squad we have, the depth and bringing in players like Coatesy – there is experience in there.

“It will be a tough game against the Welders. They’re a good team and they’ve good experienced players.” 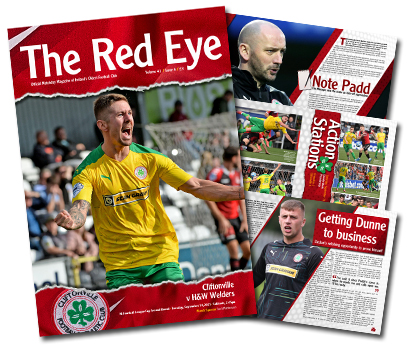 You can read the full Dunne interview in tonight’s edition of our Matchday Magazine, which will be on sale at Solitude for £3.

Featuring pre-match views from the Manager’s Office, The Red Eye’s fourth issue of the campaign reviews the Welders’ recent form, delivers yet another stat attack and steps 103, 64 and 25 years back down memory lane – plus plenty more besides.