Jamie McDonagh says his summer switch to Cliftonville has given him “a new lease of life” as he looks to build on a promising start at Solitude.

The 25-year-old has teed up three of the Reds’ four goals so far this season and, ahead of tomorrow’s Danske Bank Premiership clash with his former employers Glentoran, is eager to continue impressing.

“It’s been great, it’s given me a new lease of life,” is how the winger reflects on his time with the Reds.

“I’ve had a good pre-season under my belt and the Manager has shown confidence in me to play me in the games over pre-season and the first two league games. It’s good to repay the Manager with assists on Saturday and Tuesday. It’s been great so far, I’ve really enjoyed it and long may it continue.” 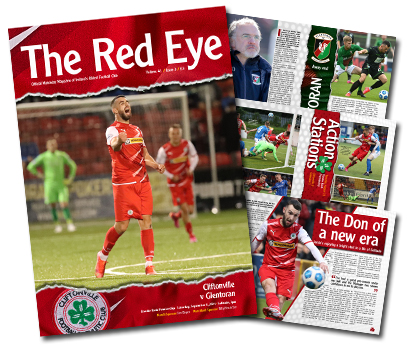 You can read the full McDonagh interview in tomorrow’s edition of our Matchday Magazine, which will be on sale at Solitude for £3.

Featuring pre-match views from the Manager’s Office, The Red Eye’s third issue of the campaign carries your latest 2021/22 player poster, reviews Cliftonville’s season to date, examines Glentoran’s title prospects and steps 73, 29 and 25 years back down memory lane – plus plenty more besides.