Aaron Donnelly admits Cliftonville’s encouraging pre-season form will count for nothing unless it translates into a positive opening day result against Carrick Rangers.

The Reds begin an eagerly-anticipated new Danske Bank Premiership campaign at Solitude tomorrow, with returning supporters keenly looking forward to seeing their team in action following almost a year-and-a-half of lockdown-enforced absences – and Donnelly is determined to hit the ground running.

“We know that we’ll have to be at our best if we want to claim the points and make a winning start,” says the 21-year-old defender.

“I thought we looked sharp and created plenty of chances during our friendlies and we looked good going forward and we need to bring that into the competitive games at the start of the season.” 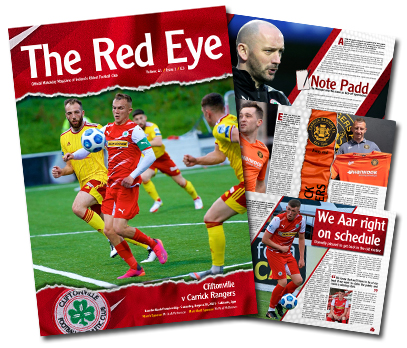 You can read the full Donnelly interview in tomorrow’s edition of our Matchday Magazine, which will be on sale at Solitude for £3.

Featuring pre-match views from the Manager’s Office, The Red Eye’s first issue of the campaign carries your opening 2021/22 player poster, reflects on Cliftonville’s pre-season programme, examines a summer of change at Carrick and steps 99, 71 and 36 years back down memory lane – plus plenty more besides.