A signed Cliftonville shirt is up for grabs as part of the upcoming Stride The Stadia charity fundraiser.

Lifelong Glentoran fans Gareth Brown and Chris Kirk will next week set off on a 210-mile trek around every Danske Bank Premiership ground in aid of Sport Changes Life – a foundation established to raise the aspirations of young people both here and in the United States.

Setting off from The Oval on Tuesday, August 17, the duo will walk to all 12 Premiership grounds over a five-day period, with Solitude one of the final venues on the list on August 21. 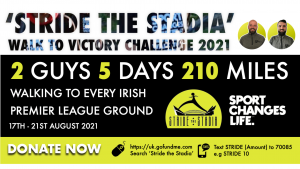 Furthermore, there’s an opportunity to win a Reds shirt signed by the first team by following these three simple steps…

1. Donate £10 via this online link, entering your full name and specifying that you would like to be considered for the Cliftonville jersey.

2. Email k.nolan@sportchangeslife.com to confirm the details of your donation (again including your full name, a contact number and your interest in winning the Cliftonville shirt).

3. Await the confirmation email which will include your Raffle number.

Winners will be announced on the Sport Changes Life Facebook page at 4.30pm next Monday, August 16.