Cliftonville Football Club places on record our thanks to the small band of volunteers who worked tirelessly for many hours at Solitude on Friday following the serious flooding event that took place in the area.

With a biblical downpour of rain in the Cliftonville neighbourhood, and the local street drainage being unable to cope, much of the water that fell was funnelled down the three streets adjacent to Solitude. Unfortunately, several areas of the stadium were badly affected by the flooding and suffered damage running into many thousands of pounds.

This included the Social Club and inside the McAlery Stand complex, both of which were completely flooded. At one stage, the water level rose to nearly three-feet and tarmac from walkways was washed away due to the sheer force of the water. 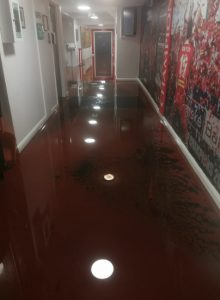 Immediately, a number of people began the clean-up process and were later joined by others. Their efforts were rewarded as, following the removal of water from the Social Club, safety checks and a deep clean, the premises re-opened last night. However, a further assessment remains to be carried out to establish the full impact.

This also applies to the inside of the McAlery Stand, which has suffered irreparable damage to floor coverings and some walls. Again, thanks to the great efforts of a number of volunteers, the affected areas were stripped out and damaged furnishing was removed, with a specialist deep clean carried out yesterday morning.

The deluge of water from the nearby area also encroached onto our new pitch and, while it drained in a relatively quick time and was available for first-team training yesterday morning, a full inspection in conjunction with the contractor who installed it will be carried out tomorrow morning to ascertain the full extent of the impact. It is not expected that this will affect our friendly fixture with Derry City tomorrow night.

Without the hard work of those on Friday, the impact would have been greater and they deserve huge praise. We have great sympathy for those other businesses and especially those families who have suffered damage to their properties in the area and hope that they are given all the assistance they may need.