It was with deep sadness that Cliftonville Football Club learned of the death of former Manager Brian Halliday.

Brian was appointed in 1974 – indeed, this Saturday marks 45 years since his first game at the helm ended in a City Cup victory over Larne – and, though he moved on to the Invermen two years later, is widely credited for laying some of the foundations upon which his successor Jackie Hutton built his 1979 Irish Cup winning side. 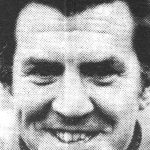 In the same year that the Reds were toasting that iconic triumph, Halliday – along with wife Catherine and three daughters Naomi, Rosalind and Stacey – emigrated to the United States, where he founded a successful insurance firm, all the while maintaining his strong sporting links.

As well as being part of the US Special Olympics coaching set-up, Brian was also the owner, Manager and coach of California Sunshine and operated a directors role at North American Soccer League side Tulsa Roughnecks.

A former Linfield Rangers, Cruaders and Shorts player, Brian also represented various rugby teams and was a keen runner in addition to being General Secretary of the Northern Ireland Professional Footballers Assocation.

Cliftonville FC, who are grateful for his service at Solitude and acknowledge the stirling work he did during his brief tenure, extends sincere sympathies to the Halliday family circle at this very difficult time. May he rest in peace.