Cliftonville Football Club paid a further tribute to the memory of Tommy Breslin ahead of last night’s Danske Bank Premiership victory over Glenavon at Solitude.

On an emotional evening, members of the Breslin family were warmly welcomed by both sets of supporters before captain Chris Curran joined Tommy’s assistant Peter Murray in carrying a commemorative wreath onto the pitch along with Dr John Campbell and physiotherapist Chris McKenna. 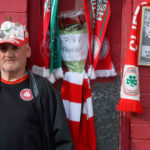 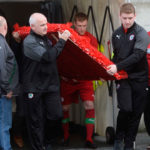 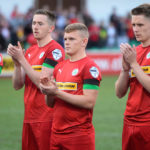 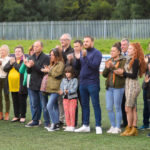 With the wreath placed on the same penalty spot from which George McMullan netted that never-to-be-forgotten strike to deliver Breslin’s first League title in April 2013, everyone at Solitude observed an impassioned minute’s applause for our beloved former Manager.

On an evening when the match itself was always going to take second billing, Cliftonville proceded to deliver a performance that Tommy would have been proud of and, as we reflect back on what has been a very difficult week for everyone associated with the Club, we once again place on record our sincere thanks for all the messages of condolence and support that we have received from people across the sporting spectrum.