The Cliftonville FC Awards for the 2018/19 season took place at The Devenish Complex on Friday night.

Staged during Ryan Catney’s Testimonial Dinner celebrations, the ceremony commenced with Chairman Gerard Lawlor delivering his review of the campaign just finished before announcing the inductions of the Reds’ 1979 Irish Cup winning side into the Club’s Hall of Fame, alongside long-serving custodian Dr John Campbell.

The Freddie Jardine Special Merit Award – presented to an individual who has voluntarily provided outstanding contribution and service – was bestowed upon Roisin Lawlor for her sterling but often unseen work behind the scenes at Solitude before captain Chris Curran revealed that he and his team-mates had nominated Ryan Curran as the Players’ Player of the Year. 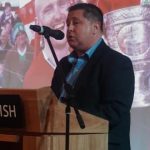 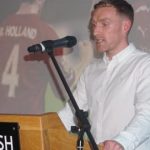 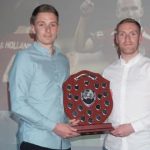 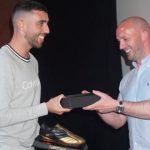 Michael Hegney, who excelled in his role as compere for the evening, then conducted an on-stage interview with Manager Paddy McLaughlin, who dished out the Golden Boot to 29-goal striker Joe Gormley, before the Chairman returned to announce that Ryan Curran would depart with double honours to his name having been crowned the Official Cliftonville FC Player of the Year.

Our congratulations go to Ryan and all our award winners, with special gratitude reserved for everyone who ensured Friday night’s occasion was such a success, from organisers to ticket bearers and, of course, photographer Mick Harland as well as the staff at The Devenish Complex for their assistance. 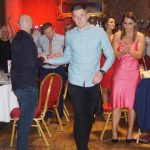 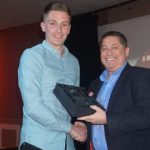 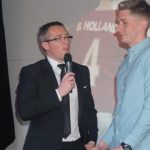 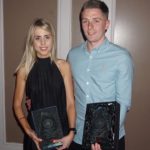