The latest season of the fonaCAB Development League concluded with yesterday’s presentation day at Solitude.

More than 400 youngsters from a multitude of Clubs were rewarded for five months of hard work as the curtain came down on another rewarding campaign.

Every Saturday morning, Solitude plays host to 54 teams across two age-groups, where boys and girls born in 2012-13 contest games consisting of three 12-minute periods in a fun and simplified environment, where enjoyment of the game is encouraged as a matter of priority. 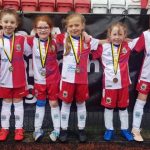 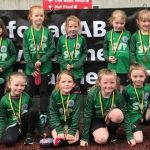 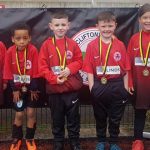 The fonaCAB Development League might have ended for the summer, but there’s plenty more to keep the next generation occupied thanks to the Cliftonville FC Skill School.

Open to boys and girls of mixed abilities aged 4-9, sessions – which consist of expert guidance from fully qualified coaches – take place between 4.45-5.45pm every Monday and Wednesday and, at a cost of just £3, provide the perfect sporting environment for youngsters to improve their social, interactive and footballing skills, so why not bring your son or daughter along this week and let them experience the fun for themselves?