Save The Children’s Christmas Jumper Day is returning tomorrow and Cliftonville FC are delighted to swap our kits for festive knits in support of the campaign.

Sports teams, workplaces, schools, nurseries, universities and households in their thousands have signed up, with this year is set to be the biggest and best yet with the charity expecting over five million people to take part, making Christmas Jumper Day one of the country’s biggest annual charity fundraisers. 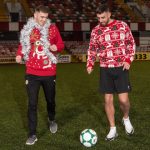