While Cliftonville were being roared on by a typically passionate support in Denmark last night, some 1254 miles away back in Belfast, fans assembled to watch the decisive leg of the Club’s Europa League First Qualifying Round against Nordsjælland live in the Social Club at Solitude.

A surreal experience for members of the Red Army who have grown accustomed to cheering the team on in the flesh from one week to the next, a large crowd enjoyed a memorable night glued to the big screen as Cliftonville attempted an historic turnaround against the Danes. 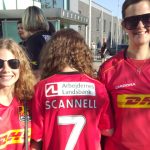 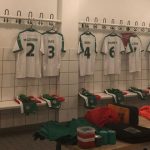 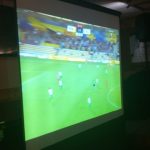 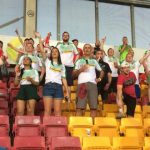 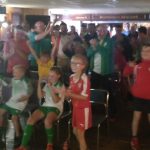 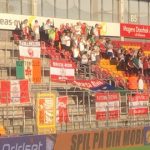 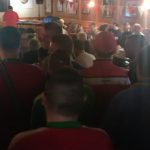 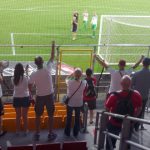 Video footage captured the moment the Social Club exploded with joy when Joe Gormley fired the Reds in front from the penalty spot (below) and, though Nordsjælland would eventually hit back to claim a 3-1 aggregate success, fans at home and abroad were vociferous in their appreciation of the players’ display.

It wasn’t just the team who were credited for their impressive performance, with our Danish hosts and the UEFA Match Delegate quick to pay tribute to the fanatical backing of the Red Army at Right To Dream Park – where a home fan sporting the Scannell surname on the back of her replica shirt became an unwitting celebrity in the countdown to kick-off.

Indeed, our supporters – who were based in nearby Copenhagen for the trip – made a typically positive impression during their stay in Denmark and remained in the stadium long after Nordsjælland’s fans had departed, refusing to leave until boss Barry Gray and his players emerged for a final serenade.

The Club places on record our sincere thanks to everyone who travelled to Farum for the game as well as those whose dedicated efforts ensured that supporters back home were able to enjoy the contest in eachothers’ company at Solitude.

Cliftonville Football Club is not responsible for content on external sites.