Cliftonville Football Club are deeply saddened by the passing of Fred Jardine at the age of 94.

A hugely respected figure throughout Irish League football, Freddie served his beloved Reds in a multitude of roles throughout an association that spanned an incredible 73 years and all at Solitude – where the Physiotherapy Suite is named in his honour – will miss his presence dearly.

“Freddie was synonymous with Cliftonville FC and his loss has left us devastated,” said Chairman Gerard Lawlor.

“The fact is, nobody at this Football Club can remember a time before Freddie – he was always here, always working, always dedicated and always open and available for a quick chat, a joke or a discussion about the latest match.

“He loved Cliftonville and Cliftonville loved him. The two have been one and the same for almost three quarters of a century and I know that, in addition to myself, the Board, our players and supporters, there will be countless people from generation after generation who will be deeply saddened to hear that Freddie is no longer with us.” 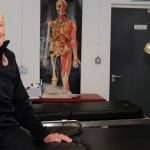 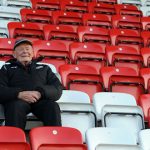 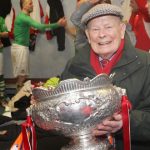 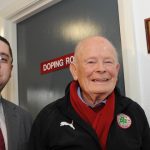 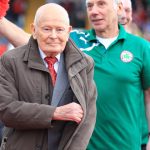 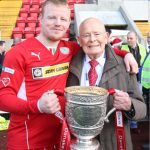 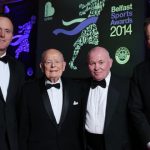 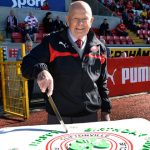 Though he spent his youth cheering on Linfield alongside his father, there was never any doubting Freddie’s wholehearted dedication to Cliftonville from the moment he stepped through the door just after the end of the Second World War in 1945.

Combining the role with a similar position within the Northern Ireland youth set-up, where he tended to the likes of George Best and Pat Jennings, Freddie remained a familiar face at Cliftonville and contributed to all of the milestone moments of the last 40 years, from the iconic Irish Cup win of 1979 through to the famous back-to-back Premiership title successes of recent times.

As well as serving as Club President until as recently as September of last year, Freddie’s commitments at Solitude were also recognised by bodies outside of Cliftonville and, amid a multitude of personal accolades, the inaugural BBC NI Unsung Hero was presented to him in December 2003 – less than a month after he had assisted captain Mickey Donnelly in lifting the League Cup following a penalty shoot-out defeat of Larne.

In 2013, he collected the Malcolm Brodie Merit Award for services to football at the Ulster Footballer of the Year gala and, the following year, the Lifetime Contribution honour at the Belfast City Council Sports Awards went Freddie’s way, with then Lord Mayor Mairtin O Muilleoir commenting: “Freddie represents the sort of local sports supporter and volunteer that we are trying to highlight. He has dedicated his life to a local club, contributing much to their success, but never seeking the spotlight.”

Cliftonville Football Club extends deepest sympathies and condolences to Freddie’s friends and the entire Jardine family circle at this very difficult time. We are grateful to have known him, humbled to have worked with him and proud to say that his synonymy with the Reds will ensure that he will never be forgotten at Solitude. May he rest in peace.