Cliftonville Football Club is shocked and saddened by the loss of Paul Straney.

A hugely popular figure during his playing days with the Reds, Paul returned to Solitude as Goalkeeping Coach during Tommy Breslin’s tenure as Manager.

A larger than life character who was fiercely proud of representing Cliftonville, Straney’s penalty shoot-out heroics not only saw off Crusaders in the Semi Finals of the League Cup in 2003, but also proved pivotal as the Reds overcame Larne in the decider to lift the trophy for the first time in history.

A minute’s applause will be held in his honour ahead of tomorrow’s Premiership fixture with Glentoran, during which Cliftonville will wear black armbands as a mark of respect, with a further tribute being paid to Paul at the Club’s Christmas Carol Service after the game.

“The whole Club is in shock at the news,” said Chairman Gerard Lawlor.

“Not only have we lost a former player and coach, but also a true friend, a Red and one of our own. Paul served the Club with distinction and pride – not only was he a top goalkeeper, he was also a true character and great human being as well.

“On behalf of everyone at Solitude, I offer deepest sympathies to his family at this sad time.” 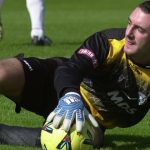 In action during his early days at the Club 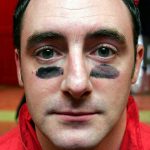 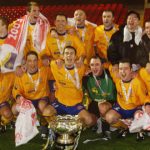 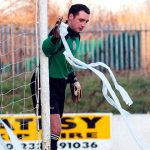 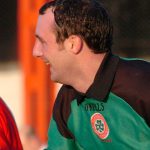 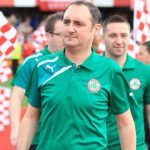 A proud Champion as part of our coaching staff

Speaking on social media, former Cliftonville boss Marty Tabb said: “Devastated to hear the very sad news that Paul Straney has passed away. Paul was a team mate and played also for the Reds while I was Manager. Paul was truly a Reds legend he never ever gave less than his very best, imagine at times I had to tell him to calm down.”

Stephen Garrett said: “Legend of a man. Contributed so much to the club as both player and coach. Will be fondly remembered and sorely missed”; Ciaran Caldwell reflected: “RIP Paul. Remember the boot polish under the eyes but you’ll be remembered for the good guy and influence you were in the dressing room through the good and bad times”, with former Cliftonville defender David McAlinden saying: “Terrible sad news about Paul Straney. An absolute character of the game here and always a gentleman to me. Thoughts with his family.”

Ex-Cliftonville midfielder Shane Mullholland said: “Knew Stranns from when I was 14! Played with him from then. Great character, great GAA player and great keeper. Some man on a night out and loved playing for Cliftonville. Absolutely shocked to hear this news”, while former Reds boss Liam Beckett described Paul as “a great goalie and a top lad,” adding: “My thoughts and prayers are with his family and friends.”

Conall McGrandles, now of Warrenpoint Town, explained: “Grew up watching Paul Straney at Cliftonville and had the chance to do ball boy behind his net at Solitude as a kid. Very sad news of his passing, what a legend he was on and off the pitch. RIP Straney, you red​”, with Cliftonville Olympic Manager Declan O’Hara saying: “It was a honour to have him as a team mate and a friend.”​

Mark Holland – who played alongside Straney at the Reds and Downpatrick – said his friend was a “true gentleman on and off the pitch”, with ex-Reds defender Ciaran Donaghy explaining: “Paul Straney was the confident, competent, eccentric goalkeeper that you wanted on your side. Partial to the odd red card as he was fired up for every game, I have him to thank for saying that I have done nets in the Irish League! A real character who will be sorely missed.”

Indeed, such was his notoriety among the refereeing fraternity, he was the stand-out candidate to take charge of a charity fixture between an Irish League Officials XI and a Media select team at Solitude – a role he embraced with characteristic enthusiasm.

He made the first of 179 Cliftonville appearances in an InterToto Cup clash with Tiligul Tiraspol on June 17, 2001 and signed off on April 29, 2006 in a then-Club Record 8-1 Premiership victory over Armagh City, although his last matchday playing role came seven months later when he was an unused substitute in the Reds’ League Cup Final defeat to Glentoran at Windsor Park.

A goalscoring goalkeeper, Paul – who was on target with a long kick-out in the 2004 Promotion/Relegation Play-Off contest with Armagh – also enjoyed success in his coaching capacity at the Club, with his stint in charge of our shot-stoppers delivering back-to-back Premiership triumphs.

Cliftonville Football Club extends deepest sympathies and condolences to Paul’s friends and the entire Straney family circle at this very difficult time. May he rest in peace.