As captain Ryan Catney enters a fresh stage of his rehabilitation, Manager Barry Gray has provided an update on all of the long-term absentees in Cliftonville’s squad.

Catney will this morning undergo a secondary operation on the broken leg he sustained last season, while fellow midfielder Ruairi Harkin and goalkeeper Jason Mooney are both making good progress from their respective injuries.

“Ryan is getting further work done and will then have six or seven weeks of complete rest, which I think might be good for him overall,” explains Gray.

“Being out injured for so long is tough on anyone and it’s obviously made more difficult when there are complications like he has had. Being forced to rest will hopefully allow things to settle down again and then, when it’s deemed that he can start to step things up, we’ll take it from there.

“It’s a lot for anyone to go through and is obviously deeply frustrating for the player but, in terms of the character concerned, I’ve no doubts at all about him coming through it – it’s Ryan Catney.” 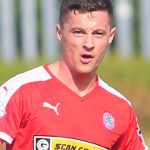 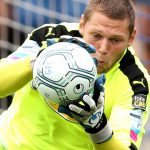 An anterior cruciate ligament injury has, meanwhile, kept Harkin sidelined for approaching a year now and, though he has likewise endured a recent setback in his pursuit of fitness, Gray is keeping his fingers crossed that the 28-year-old is not too far away from a return.

“We’ve had to unload Ruairi from training because he suffered a problem unrelated to his injury,” he adds.

“It was just one of those things you get when you’ve been out for so long and you’re working your way back, nothing serious but enough for us to just step things down a little bit. We’ll give it the time it needs and then reload him up again.

“I wouldn’t want to be shouting too loudly about it or anything but we’re working with him and hopefully we’ll get somewhere before too long, we’ll see.”

On Mooney – who suffered a serious knee injury in April – Gray says: “He’s been involved in some of our sessions and in the pre-match stuff for the last wee while, but it’s been a tough road for him, too.

“He’s probably still a fair bit away but, like anyone else, we’ll keep monitoring the injuries and working with the players and hopefully we’ll start to see some of these longer-term things clearing up before long.”