Cliftonville’s Under 12 players, their parents and coaches enjoyed a wonderful personal development experience when they got to sample life as an Academy player at a professional Football Club this summer.

English League 1 Champions Sheffield United recently invited the Wee Reds to their training complex to gain an insight into an Academy graduate’s day to day activities and, first published in last Saturday’s edition of The Red Eye, FDC coach Gerard Mallon pens a brief recount of our 2006 squad’s memorable trip…

Day 1
Arriving at Belfast City Airport at 6am, the lads, their coaches and parents endured a non-stop and day of travel and activity.
Up first, after booking into the hotel, was a Museum and Stadium tour of Sheffield United’s Bramall Lane home. Hosted by Blades legend Tony Currie, the travelling party got access pitchside, to the Directors area and the changing rooms. Following an excellent afternoon and superb hospitality by the Club, we popped across the way to their noisy neighbours to face the Sheffield Wednesday Academy side.
A challenging game met us at Middlewood Road where an excellent Under 13 side, getting 10 hours a week contact time with their coaches, provided a hard task. Their players had almost two years in age and a big difference in physicality, but we were proud of the effort put in by our lads in defeat. After a long tiring day, we headed to the hotel for a much needed early night. 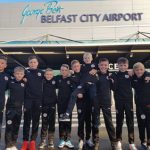 All smiles despite an early start 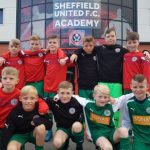 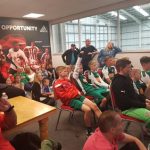 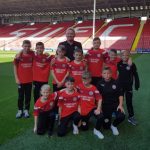 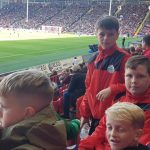 Taking in the Blades' clash with Barnsley 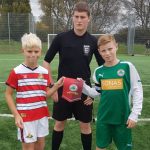 Day 2
A great day lay ahead for the lads as we headed to the Sheffield United Academy.
The Club’s lead phase coaches had arranged an indoor session with U11/12 Academy players on fundamental movement and ball skills, before heading outside to the 3G pitch for the game.
Our boys did exceptionally well and gave a great account of themselves technically and mentally against a very good Blades side, putting on an excellent team performance to win the game 4-0, with goals from Harrison, Parker (2) and Walsh.
After lunch, they had laid on a great exercise for both players and parents, as the Club Psychologist delivered a workshop based around belief, preparation and mindsets of youth and professional players. A smashing day for all, and yet more great hospitality from Sheffield United.
After leaving the Academy, there was a few hours downtime before dinner, and then onto Laser Quest for a fun activity and end to a very special day.

Day 3
The lads were up early and full of excitement, as matchday was here.
We made the short journey up to Bramall Lane for the derby game between Sheffield United and Barnsley. We collected our complimentary tickets and the seats were smashing – pitchside and only a few feet away from the Barnsley fans. The atmosphere was electric and the boys enjoyed the experience very much. After the game, the lads waited around and met Captain Billy Sharp, who had just scored the winning goal.

Day 4
A lazy morning for all after a tiring few days, before Peter from Wynn travel, our coach driver, collected us to head for our last game at the Keepmoat Stadium against League 1 side Doncaster Rovers Academy.
A quick glance around the facilities and then straight into the game. The Wee Reds, not at our best, did well against another professional outfit, defeating Rovers 3-1 with goals from Farmer (2) and O’Hara. Then the anti-climax hit us – the trip was at an end and we were en route to Manchester Airport to head home.

An excellent time was had by all and, on behalf of the Club, I would like to commend and thank all the parents for their support and help in raising the funds to make the trip happen. I hope they all had a smashing time.

Our lads were tremendous, both on the field and off it. Manners and discipline were excellent, and they represented Cliftonville Football Club very well. We hope that this trip has been inspirational for them on their journeys as young people and footballers.

We extend sincere thanks to all the Clubs that accommodated us – especially the staff at Sheffield United, who gave us a great experience -as well as paying tribute to Academy Director Travis Binnion and Ryan Laight for their hospitality.