Match Sponsor Jack Patterson certainly enjoyed value for money as the Reds clocked up an entertaining 6-3 success in Barry Gray’s first game in charge, while Matchball Sponsor Colin Simpson was likewise treated to a memorable 90 minutes as a guest of the Club. 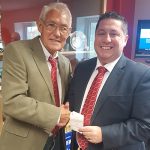 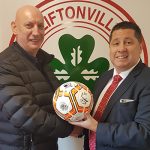 Chairman Gerard Lawlor commented: “We’re very grateful to both Jack and Colin for their support and I’m delighted the match lived up to expectations, with nine goals, a few efforts off the woodwork and plenty of talking points throughout. Our Sponsors’ backing is always very much appreciated and I would encourage others – be they individual supporters, tradesmen or business owners – to get involved through the rest of the season.”

Match Sponsorship starts at just £150, while the Matchball can be obtained for £75 and anyone interested in joining us as a Matchday Partner at Solitude is invited to discuss opportunities by emailing commercial@cliftonvillefc.net.

Stadium Advertising: Add your company’s name and logo to an advertising board at Solitude for just £500.
Match Sponsorship: Become the sole sponsor of a home fixture for as little as £150.
Matchball Sponsorship: Help support the Club on matchdays by putting your name to the ball for a mere £75.
Matchday Magazine: Advertise in The Red Eye, where costs start at £50.
Website: Engage with our online followers from just £50 per season.