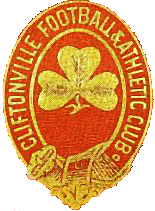 So read the notice in the News Letter and Northern Whig on September 20, 1879 and the rest, as they say, is history. A wonderful history.

The advert was placed by John McCredy McAlery, a young Belfast businessman who had fallen in love with

Association Football while on honeymoon in Scotland the previous year and, after taking it upon himself to bring the sport to Victorian Ireland, eventually came to form the country’s first Football Club, who we are proud to say are continuing to play a key role in the modern game today.

John McCredy McAlery was born a farmer’s son in the County Down town of Rathfriland in 1849 but, rather than following his father’s footsteps, he travelled to Belfast to serve his time in the Drapery business in a rapidly growing city. He quickly became a very successful businessman and opened his own premises, The Tweed House on Royal Avenue.

A talented cricketer in his youth, he helped in the formation of the Cliftonville Cricket Club in 1870 and in time rose to the rank of Treasurer within the Club.
He was also a great supporter of Rugby but, during his 1878 honeymoon, he witnessed his first ever game of Football and, like so many of us, was instantly hooked.

He took it upon himself to invite two Scottish teams to Belfast for an exhibition match and, on October 24 of the same year, Queens Park beat Caledonians 3-2 at the Ulster Cricket Grounds in a game which whetted the appetite of the local public.

While nobody really knows the size of response his September 1879 newspaper advert generated, it was certainly enough to encourage McAlery to proceed with his dream because, just seven days later, the first ever Cliftonville team took to the field to face a side of Rugby players known as The Quidnuncs and lost the game 2-1 at Cliftonville Cricket Club.

In those early days, the Club’s ground was enclosed only by a thin hedge and among McAlery’s secretarial duties was the task of ensuring nobody jumped said hedge and gained admission without paying entry. Nor was it a rare sight to see him scurry from the centre spot on a rainy day with buckets of water in each arm in a valiant attempt to ensure the pitch was playable.

McAlery knew that, without opposition, Cliftonville would not last very long and so he took it upon himself to to help the members of Knock Cricket and Lacrosse Club form their own Football Club.

He had similar messages for other Cricket sides and certainly had a positive impact because, on November 18, 1880, a meeting was held at Cliftonville’s request in the Queens Hotel in Belfast which saw the formation of the Irish Football Association.

Major Spencer Chichester, from Moyola Park, was appointed President, while McAlery asumed the Secretary’s role. Writing the Minutes of that meeting in which the fourth-oldest Association in the world was born, he wrote in the appendix:

If the spirit which pervaded from those present be acted upon then the result will be a strong Association for promoting the game which we have espoused.

McAlery’s involvement in the game was not simply Secretarial – he was also captain and right-back of those early Cliftonville teams, noted as “a splendid full back who kicks well with either foot and is a remarkably good tackler”.

The Reds made it to the inaugural Irish Cup Final in 1881, only to lose 1-0 to Moyola Park, and they would suffer a similar fate the following year when they lost 2-1 to Queen’s Island in the showpiece fixture. At the third attempt, however, McAlery finally got his hands on the Cup when Cliftonville defeated Ulster 5-0 at Knock.

While all this was going on, though, there were other things in the bigger picture to be attended to.
The IFA played their first international against England at Bloomfield in Belfast on January 30, 1882, and, with McAlery in his usual skipper’s role at right-back, they were comprehensively beaten 13-0 and it is said the experience left him in tears in the dressing room afterwards.

He earned one further international cap in a 7-1 defeat to Wales in Wrexham a week later before deciding to concentrate his efforts on off-field matters. He held the position of IFA Secretary until 1887 and, during that time, also acted as a referee in several international games.

The inaugural meeting of the Irish Football League was held on March 14, 1890 in the Belfast Estate Office of the Marquess of Dufferin and Ava with M McNeice (Cliftonville) as its first President. Seven other Clubs agreed to participate – Clarence, Milford, Oldpark, Distillery, Glentoran, Ulster and Linfield. It was not, however, until 1906 that

Cliftonville would first win the League outright, ahead of their first outright success in 1910, which was achieved thanks to a 4-1 victory over Glentoran on the final day, Fred Neville bagging a hat-trick.

In the same year of the IFL’s formation, the Reds, made the decision to move to a new ground, deciding upon an enclosure on the opposite side of the Cliftonville Road to the Cricket Club and, with Cliftonville Recreation Company Ltd as landlords, possession was taken of Solitude, which remains the Club’s home until this very day.

John McCredy McAlery – a man to whom all Football fans in Ireland owe so very much – passed away at the age of 75 on December 3, 1925 at his home on the terraces of Belgravia on the Lisburn Road.

The Football Club he left behind endured a difficult next half-century, finishing bottom of the league eight times in 10 years between 1937 and 1947, three times from 1948-56 and for 11 consecutive seasons from 1957-1968, often having to apply for re-election to the competition.

It was not until Cliftonville changed from Amateur Status in 1970 that the Club enjoyed a rebirth.

Please note the history section of our website remains under construction.