Regular readers of our Matchday Magazine will have noticed a valuable new addition to the back page in recent times.

An initiative of Pedro Donald – a Cliftonville fan whose American Bar hostelry holds a long-standing association with the Club – has seen advertising space reserved for PIPS, a local charity dedicated to providing support to individuals who are considering, or who have at some point considered, ending their own lives.

With headquarters based just minutes from Solitude on the Antrim Road, PIPS also offer support to those families and friends who have been touched by suicide. 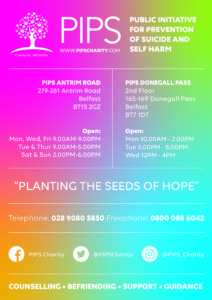 The full-page advert’s first appearance assumed further poignancy when Carrick Rangers – who, like ourselves, were affected by the loss of former player Jerry Thompson in December – provided the opposition last Tuesday night and we place on record our thanks to their new loan signing Alexander Gawne for joining our own Seanna Foster and Martina McIlkenny of PIPS in welcoming the ad’s prominent positioning in our matchday publication.

We likewise extend gratitude to Mr Donald for his generosity and, appreciative of the key role we have to play in our community, Cliftonville FC are only too pleased humbled to deliver the important message about the work PIPS carry out all year round.