Ronan Doherty says this evening’s encounter with Carrick Rangers allows Cliftonville a further opportunity to put a disappointing January behind them.

Following a run of Danske Bank Premiership defeats that straddled a County Antrim Shield Final win, the Reds kicked February off by claiming Irish Cup progress at the expense of Rathfriland Rangers at the weekend and Doherty – part of the side beaten by tonight’s opponents just a fortnight back – is looking forward to maintaining that upward curve.

“We owe Carrick one after the beat us a few weeks ago,” he says.

“We want to forget about January, February has to be a winning month and we need to get back to what we’re good at. We’ll get Carrick out of the way first and see how we go from there.” 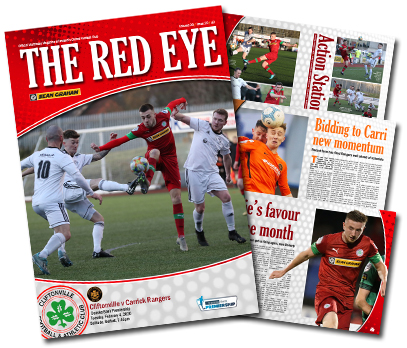 You can read the full Doherty interview in tonight’s edition of our Matchday Magazine, which will be on sale at Solitude for £3.

Featuring pre-match views from the Manager’s Office, The Red Eye’s 20th issue of the campaign carries your latest player poster, looks at the stats behind Carrick’s impressive form and steps 138, 64 and 28 years back down memory lane – plus plenty more besides.