Levi Ives warns that Cliftonville cannot be distracted from their task against Linfield this evening.

A bumper attendance is expected for the eagerly-anticipated Danske Bank Premiership showdown but Ives insists that the presence of the Sky Sports cameras – as well as an inevitable backlash from a Blues side still smarting from their shock Irish Cup exit last week – must be blanked out as the Reds target the addition of three valuable points.

“There will be a massive crowd but it’s just another game in the way of where we want to be so we’ll just take it as it comes,” says the 22-year-old.

“Any Club would want to bounce back, especially from a shock defeat like they suffered against Queen’s, but we’ll look after ourselves and just see how we go.” 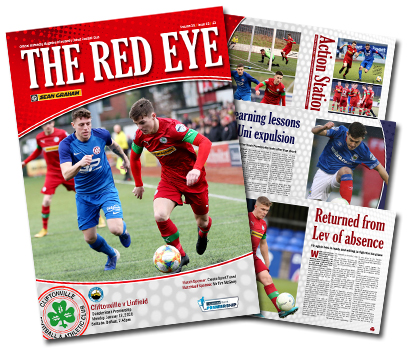 You can read the full Ives interview in this tonight’s edition of our Matchday Magazine, which will be on sale at Solitude for £3.

Featuring pre-match views from the Manager’s Office, The Red Eye’s 18th issue of the campaign carries your latest player poster and steps 120, 80 and 30 years back down memory lane – plus plenty more besides.