Thomas Maguire says Cliftonville are not underestimating the challenge that will be presented by Hanover in tomorrow’s Sadler’s Peaky Blinder Irish Cup Fifth Round tie.

The Mid-Ulster Football League Intermediate A Champions visit Solitude as huge underdogs but Maguire – who opened his scoring account for the Club when he found the net in Wednesday’s defeat of Glenavon – insists the Reds will show full respect to their opponents.

“Every Fifth Round of the Irish Cup, there is always a big team to get beat – so we’re going to try and make sure it’s not us,” says the 20-year-old.

“We’ll go out with the same mentality and try and get the job done.

“It’s all about momentum at the minute and we have momentum at this moment in time. Hopefully we can use it to push on in the second half of the season and who knows what could happen?” 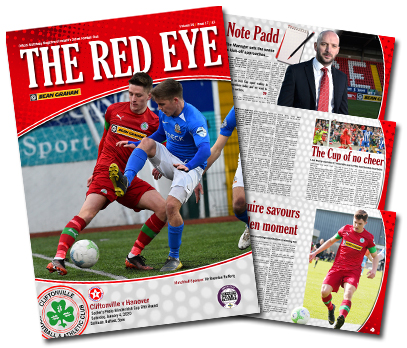 You can read the full Maguire interview in this tomorrow’s edition of our Matchday Magazine, which will be on sale at Solitude for £3.

Featuring pre-match views from the Manager’s Office, The Red Eye’s 17th issue of the campaign carries your latest player poster, reviews 41 years of Irish Cup heartache and steps 138, 78 and 24 years back down memory lane – plus plenty more besides.