Jamie Harney says Cliftonville can sympathise with Glenavon’s struggles this season – because he and his team-mates found themselves in a similar position last term.

The Reds host the Lurgan Blues in tomorrow’s New Year’s Day clash at Solitude, with Harney warning against paying any heed to the visitors’ standing in the Danske Bank Premiership.

“We definitely can’t take Glenavon for granted, they’ve some brilliant players and I think we were in a similar position to them last year,” he says.

“No doubt they’ll be coming back stronger and they’ve already signed a few players for the second half of the season.

“We’re going to have to be on top of our game.” 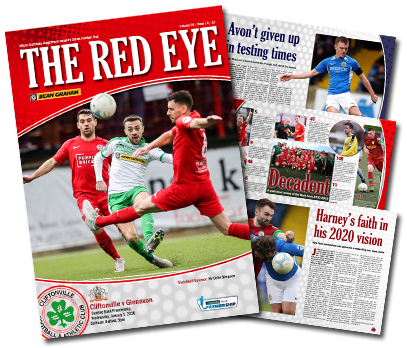 You can read the full Harney interview in this tomorrow’s edition of our Matchday Magazine, which will be on sale at Solitude for £3.

Featuring pre-match views from the Manager’s Office, The Red Eye’s 16th issue of the campaign carries a statistical review of the decade, assesses Glenavon’s prospects and steps 139, 44 and 22 years back down memory lane – plus plenty more besides.